Indiana Statehouse – In the wake of an unprecedented spike in overdose deaths and against the outcry of rural and urban Hoosier families, Indiana’s State Senate voted Thursday, February 24th to pass HB 1300, a bill which would end charitable bail exacerbating the overdose crisis and mass incarceration in Indiana. By restricting the ability of organizations and individuals to pay bail on behalf of someone arrested for a crime, HB 1300 will result in more Hoosiers forced to stay in jail just because they are poor.

On February 24th, over fifty rural and urban Hoosier families traveled to the Statehouse from over fifteen different counties to share their stories and voice their opposition to HB 1300. Floyd County Hoosier Action leader Carissa Miller explained how the bill would hurt families struggling with substance use disorder: “Let’s be clear: HB 1300 will NOT keep Hoosier families safe. It will tear Hoosier families apart. HB 1300 is a bill written by and for the predatory bail bonds industry, so they can have monopoly in a market which exchanges cash for freedom. My own sister sat in jail for five months without necessary psychiatric care because our family was unable to afford to pay her bond.”

Although it’s not supposed to be a punishment, cash bail ends up creating a two-tiered justice system: one for the rich, another for the poor, undermining the central value that everyone is “innocent until proven guilty.” Indiana’s jails are already dangerously overcrowded, and someone has died in Indiana’s jails every two weeks, on average, for more than a decade. The majority of Hoosiers languish in jail on nonviolent charges and before being convicted of any crime. In 2019, 7 of the 10 most frequently filed felonies in Indiana were charges related to poverty and substance use. Poverty and addiction are not problems which can be solved with more incarceration. When Hosier families are thrown into crisis the likelihood of substance use increases.

“This bill, HB 1300, is an attack on charitable organizations, and  is an attack on families like mine,” said Jerrica Hall, a Scott County mom in recovery who has previously been stuck in jail because she could not afford bail. Her husband has also struggled with substance use and incarceration. “While I was stuck in jail I lost everything, my job, my car, my apartment just because I couldn’t afford $500 in bail.”

This bill wastes public dollars locking Hoosiers up which would be better spent on proven solutions. Permitting bail is fiscally responsible. It costs more money to keep people in jail pre-trial for weeks, months, sometimes even years than releasing them on bail.

“Today the Indiana General Assembly chose to side with the predatory bail bond industry over Hoosier families,” said Hoosier Action Executive Director Kate Hess Pace. “Instead of spending more money to keep Hoosiers locked up, our legislators could spend it on proven solutions to help our families, like providing safe housing, quality childcare, great schools, and pathways to recovery.”

Although today’s vote is a setback, Hoosier Action leaders are not backing down, and will continue to fight Hoosier families and for the Governor to veto HB 1300. 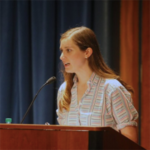