Despite Governor Holcomb’s vocal support, bi-partisan authors on the bill, the support of some of the largest employers in our state, four local Chambers of Commerce, and countless nonprofits and labor unions, the bill was still stopped.

When we heard that the bill was under attack on Friday, we mobilized. In 48 hours, we reached out to 7,000 Hoosiers across the state, delivered over 150 constituent calls into 14 Senate districts, 200 signatures from people of faith from 7 counties, over 100 direct constituent emails, and organized today’s day of action.

Last year, the Indiana Manufacturing Association and the Indiana State Chamber of Commerce contributed nearly $3 million dollars to our State Senators and Representatives. These organizations, primarily representing the interests big, corporate businesses lobbied Senators against this vital bill, putting their bottom line ahead of the lives of Hoosier mothers and babies. 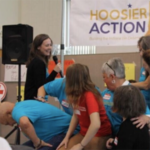