This year we came together across race and place to fight for Hoosier families at the Statehouse. Hoosier Action leaders traveled from all over the state every single week–sometimes multiple times a week–to meet with legislators and testify in committee hearings about bills which would impact our families. We organized hundreds of phone calls and emails, helped change the narrative in the press, and aligned unlikely allies to move our priorities forward. We helped pass bills to allow for eviction expungement (HB 1214), removing shackles from pregnant inmates (HB 1294), and destigmatizing substance use disorder (HB 1169). Our Bartholomew County Chapter lined up a critical bill sponsor in the fight for safe housing (SB 230). We aligned with educators to stop a bad education bill from moving forward (HB 1134).

Despite these bright spots, this session has largely been marked by inaction on the issues most important to Hoosier families. With over $5 billion in reserves, the Indiana General Assembly had the opportunity to deliver what we needed this session. But instead, some powerful politicians at the Statehouse put their wealthy corporate donors first, favoring the profits of big out of state landlords and the predatory bail bond industry over the lives of our families. Bills which would have expanded access to childcare, prevented overdose deaths, and ensured safe housing for Hoosier renters failed to move forward.

We also saw that when rural and urban Hoosier families worked together and resisted the attempts at division and distraction, we could defeat a harmful predatory lending bill, bills which undermined our public school system, and attempts to add unnecessary red-tape to vital programs like TANF and SNAP.

Hoosier families deserve more than what we got from the Indiana General Assembly this year, which is why we are going to continue to organize and build the independent political power we need to win a brighter future for Black, white, and brown Hoosiers. We know that we can and we must win a state that works for our families.

On February 24th, over 50 Hoosier families from 15 different counties across the state traveled to the Statehouse for our Families First Day at the Statehouse. We began the day by sharing our stories at a powerful press conference, which featured leaders from Morgan, Monroe, Bartholomew, Scott, Floyd, and Marion counties as well as the Vice President of the Indiana State Teachers Association (ISTA). While kids played in the Statehouse atrium, we shared our opposition to HB 1300, a bill to ban charity bail, and HB 1134, an education bill which would have undermined our teachers and schools. 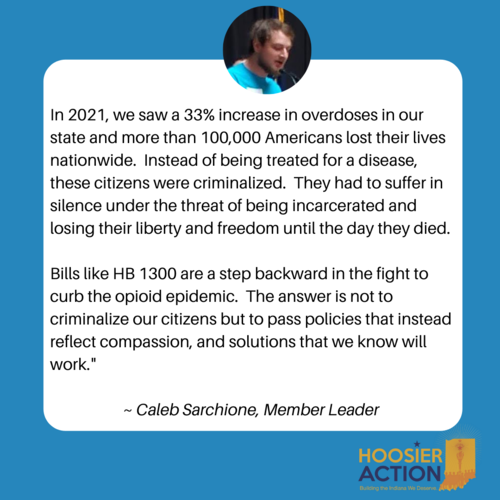 “In our community I’m still watching our families suffer. It tears me apart! Our state criminalizes poverty – whether it’s homelessness or our criminal justice system. This tears our families apart…Families need stable housing, not to be locked up for being poor.”
— Jessica Savage, Member Leader

We also released Hoosier Action Resource Center’s third report: Putting Hoosier Families Last: The Indiana General Assembly in 2022. This report details how and why the majority of politicians at the Indiana General Assembly failed Hoosier families in 2022, and demonstrates how Indiana’s 2022 legislative session has been dominated by bills intended to divide Hoosiers across race, place, and income. The same politicians who have blocked funding for our classrooms, affordable housing, childcare, environmental clean-up, and mental healthcare, tried to turn Hoosiers against our schools and our neighbors struggling to make ends meet. Those politicians who divided and distracted while ignoring  the common good did so because it served the interests of their wealthy corporate donors and helped to maintain or increase their own power.  Read, download and share the report at hoosieraction.org/reports.

“At the start of this legislative session, members of Indiana’s General Assembly could have chosen to listen to and work hard for Hoosier families. With a $5 billion surplus, Indiana’s politicians could have chosen to provide our families with affordable childcare, quality schools, safe housing, evidence-based solutions to the overdose crisis, and action to heal our climate and clean-up our land. 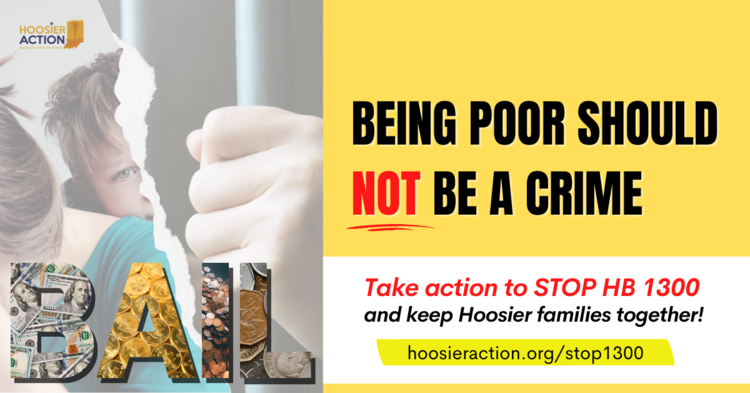 Fighting to Keep Hoosier Families Together: The Fight to Protect Charity Bail

Throughout February, Hoosier Action leaders fought hard to try to stop HB 1300, a bill to end charity bail and authored by Rep. Peggy Mayfield. On February 15, Hoosier Action leaders Michelle Higgs and Pastor Charlotte Downs provided powerful testimony in committee in opposition to this bill. By restricting the ability of organizations and individuals to pay bail on behalf of someone arrested for a crime, HB 1300 will result in more Hoosiers forced to stay in jail just because they are poor and exacerbate Indiana’s overdose crisis.

Unfortunately, despite their testimony the bill was both amended in committee to become even more harmful, and was voted out of committee. So, we came together again on February 24th to try to stop the bill from passing out of the Senate. We shared our stories with the press, explaining how this bill would tear families apart, and our leaders met with over 20 State Senators or legislative assistance to share our opposition to the bill. 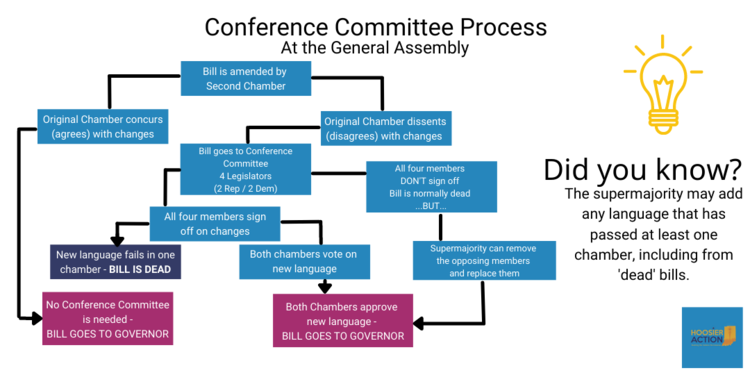 Ultimately, a majority of Indiana’s General Assembly chose to side with the predatory bail bonds industry over Hoosier families. Instead of spending more money to keep Hoosiers locked up, our legislators could spend it on proven solutions to help our families, like providing safe housing, quality childcare, great schools, and pathways to recovery.

While a setback, our fight is not over: we’ve drawn up a petition to Governor Holcomb asking him to veto the bill. Sign and share it at hoosieraction.org/stop1300.

In response to the passage of HB 1300 in the Senate, we published a press release: Indiana General Assembly Puts Profits of Bail Bondsman Over Lives of Hoosier Families: Bill to End Charitable Bail Passes Despite Public Outcry.

“This bill, HB 1300, is an attack on charitable organizations, and is an attack on families like mine…While I was stuck in jail I lost everything, my job, my car, my apartment just because I couldn’t afford $500 in bail.”
— Jerrica Hall, Hoosier Action Member Leader

Thanks to the tireless efforts of the Hoosier Housing Needs Coalition and Hoosier Action leaders, the Indiana General Assembly passed HB1214, a bill which will expand access to housing for Hoosiers by allowing for eviction expungement in certain situations. Hoosier Action leader Randy Shelton testified in support of the bill on February 9th. He shared his struggles to find safe, affordable housing after having been previously evicted.

Hoosier Action leader Jessica Savage also shared her story with Fox59. Now that HB 1214 has passed the Senate, it will go to the Governor’s desk.

On February 26, Hoosier Action leader and Smart Family Development founder Tamara Harris brought together over 30 community members to participate in a panel discussion with Indianapolis faith, community, health, and law enforcement leaders about COVID-19 and violent crime. Community members from aged 7 to age 70 joined and shared hard truths about how the pandemic and recent violent crime has impacted their lives. You can watch the full panel discussion on our Facebook page.

As we shift into Spring, we return to building out our chapters and casting vision towards the coming months. We look forward to celebrating our 5th Anniversary (so watch for more announcements to come). Outreach for members is summed up in our commitment to GTTP > Go Talk To People. 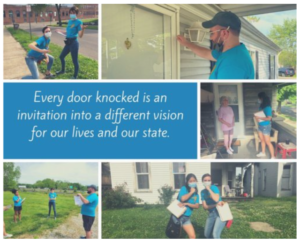 Join us Thursday evening, March 10th in Columbus for our Neighborhood Canvass to build power for working families & bring in more everyday Hoosiers who are directly impacted by housing injustice into our base! Whether it’s your first canvass or your hundredth, we welcome you! We’ll start with a quick training before splitting into pairs and start door-knocking.

Our work would not be possible without contributions from Hoosiers like you. Dues-paying members fund and drive our work. Become a dues-paying member of Hoosier Action for just $5 a month to fund the future of Indiana!

Sign up today to become a monthly dues-paying member using the button below.  Together, we can make Indiana a place where all Hoosiers, no matter their zip code or the color of their skin, can thrive.