We’re having 10,000 conversations this summer with Hoosiers across the state.

It’s official: our Hey, Hoosier Outreach program has begun! Emerging from quarantined Zoom calls, we’re finally back to in-person outreach: door knocking in neighborhoods, hosting community dinners in local parks, and having one-on-one conversations over coffee. Our goal? 10,000 conversations during this summer! We’re talking with Hoosiers about funding that’s available to their communities through the American Recovery Plan (ARP), how vaccines are vital to ending the pandemic, and what they need to recover from this crisis.  We’re growing our base, and it begins by knocking one door at a time. 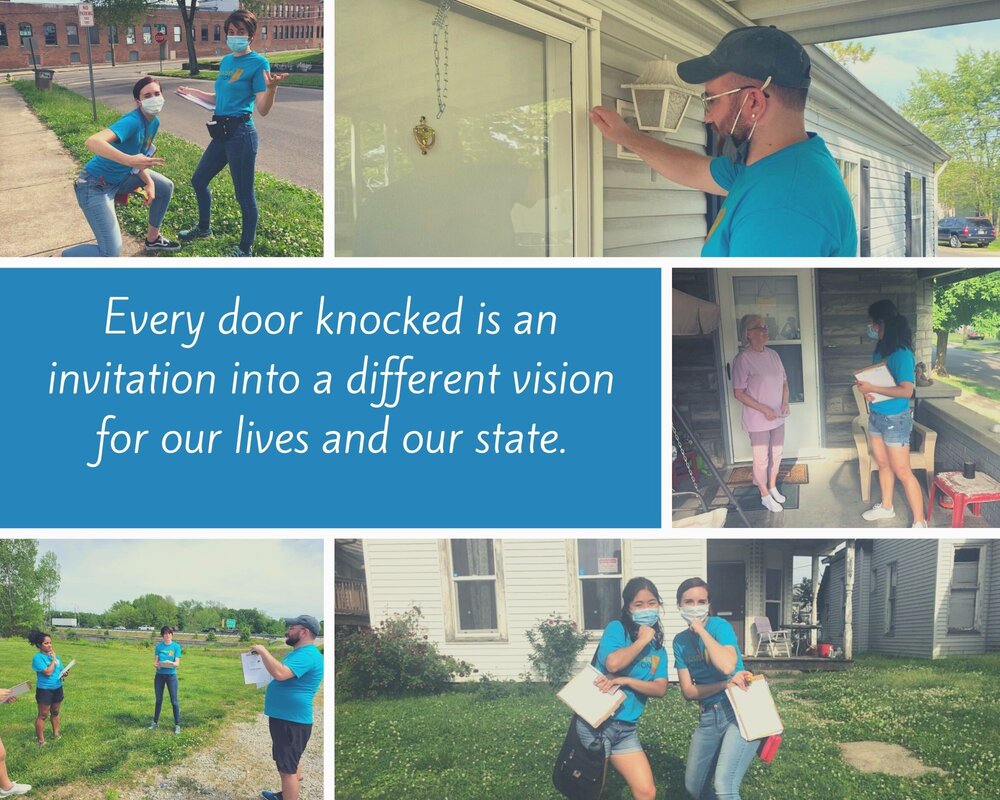 Building Our Power with Federal Legislators

Hoosier Action leaders met with Senator Todd Young as well as the offices of Rep. Jim Baird, Rep. André Carson, and Rep. Larry Buschon last month to discuss what our families need to thrive. We shared our stories and talked about the Pregnant Workers Fairness Act, extending the Child Tax Credit, and passing the MAT Act. We look forward to working with these legislators on moving these priorities and getting more protections, money, and support for Hoosier families!

$5.8 Billion is coming to Hoosier Communities!

The American Rescue Plan (ARP), the latest federal relief package, provided immediate relief to everyday Hoosiers with stimulus checks last month, and there are more resources on the way! Indiana counties, cities and towns will receive over $5.8 billion dollars to ensure that our communities have what they need to pull through this crisis. This money could transform our communities for the better. The ARP relief money could provide support for our broadband, childcare, healthcare, public utilities, jobs, affordable housing, small businesses, substance use treatment, and more! 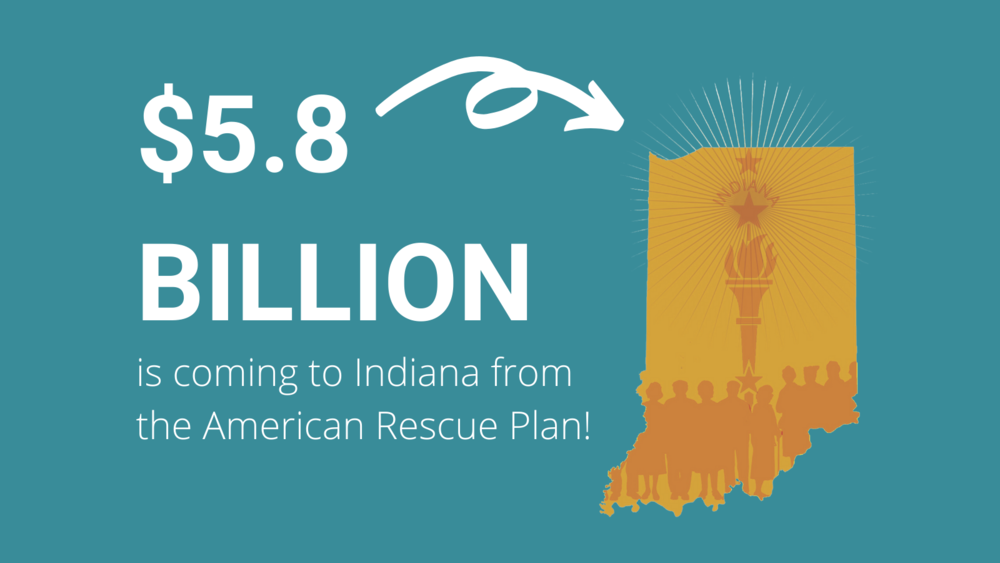 As a Hoosier, you have a say in how that money is spent by your local community. The law was written to give state and local governments the ability to exercise local control and put the money where it’s needed the most. It’s up to us to decide how this money gets spent in our state, in our towns, and in our neighborhoods. To learn how you can take action to impact how your local ARP money is spent, take our survey and check out our toolkit. 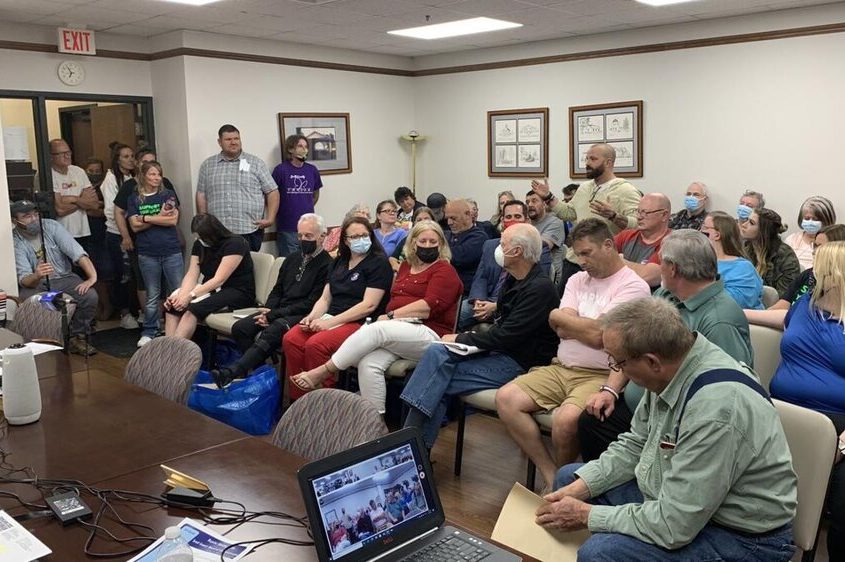 In the midst of an intensifying overdose crisis and despite widespread public support, Scott County Commissioners voted on June 2 to close the local Syringe Service Program (SSP) on January 1, 2022 in a 2-1 vote. The Scott County SSP was originally established in response to the unprecedented 2015 HIV outbreak. It has successfully operated since then as a national model, reducing new cases of HIV, Hepatitis C, and endocarditis. At the meeting, community members spoke for over two hours in support of the program. The only voices in opposition to the SSP were the County Commissioners.

Throughout April and May, Hoosier Action members worked closely with Scott County community leaders to support their efforts to protect this life-affirming public health program. On May 18th, we helped organize a well-attended press conference and town hall to share facts about the program’s success and how it keeps people healthy and saves lives in the community. Community members  also testified at the commissioner’s April meeting, held a vigil, and coordinated hundreds of phone calls, emails, and postcards from Scott county residents to their commissioners. 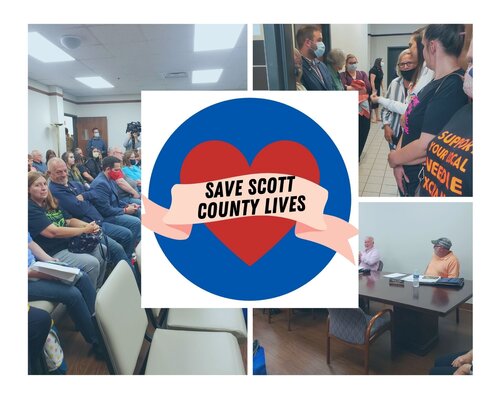 Scott County is projected to have a dramatic surge in new HIV cases, resulting in a catastrophic health crisis for the community.

Without an SSP in Scott County, a recent Brown University study projected a dramatic surge in new HIV cases. The resulting public health crisis would be catastrophic for the community, especially in the midst of a pandemic. This is exactly what happened in West Virginia in the last few months as rates of HIV infection increased dramatically following the 2018 closure of similar SSP programs.

Although disappointed, residents are committed to continuing the fight to save lives and find solutions through organizing and building power. If you are a Scott County resident and want to join the fight, reach out to will@hoosieraction.org.

Drawing Attention to Organized Money at the Statehouse 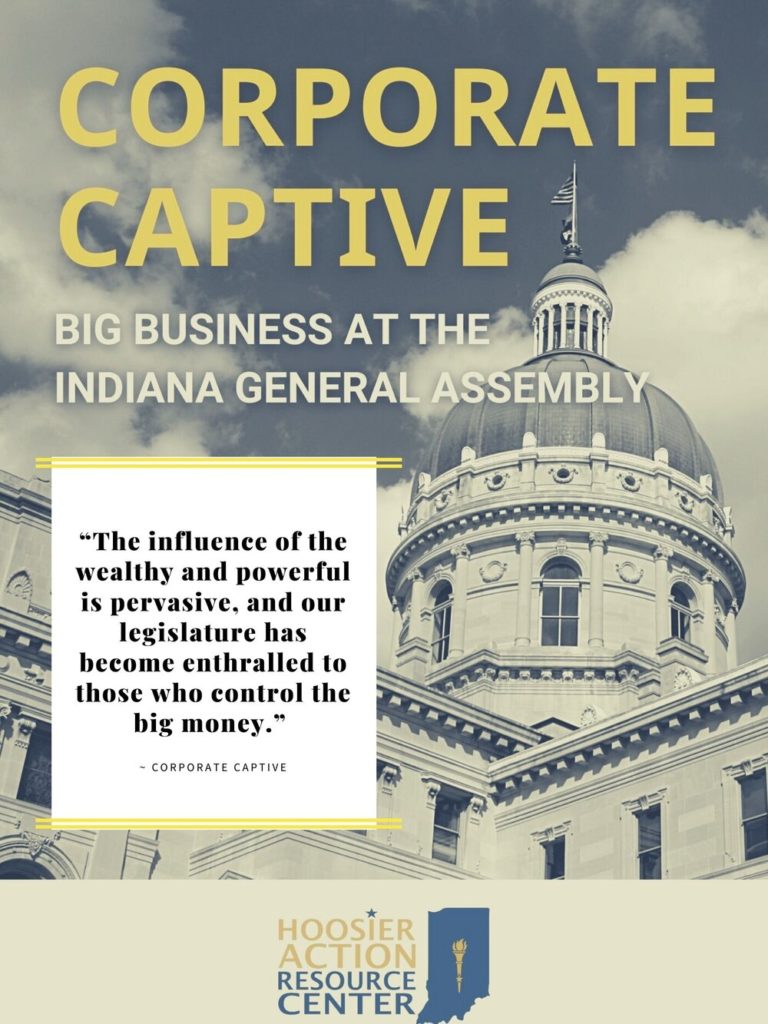 Hoosier Action Resource Center’s most recent report, “Corporate Captive: Big Business at the Indiana General Assembly” continues to draw significant press attention to the malign influence of corporate power at the Statehouse. Over the course of May, an editorial originally published in the Anderson Herald Bulletin, has been republished in over 10 other papers across the state! On June 1st, Indiana Public Media published a story about the report featuring research team leader Dennis Davoren.

With 91% of all state legislative campaign contributions coming from PACs and large donors, we are in agreement with the findings:

To build a brighter future for Indiana—one where every one of us can have healthy, fulfilled lives—we must have a functioning democracy, one which ensures that Hoosiers of all backgrounds have a say in the decisions which impact our lives. To combat the organized money of special interests, Hoosiers must organize themselves and act together to change the balance of power at our Statehouse. Everyday Hoosiers should be at the center of our legislative process. To achieve that goal we must demand more, act courageously, and stand with and for each other. 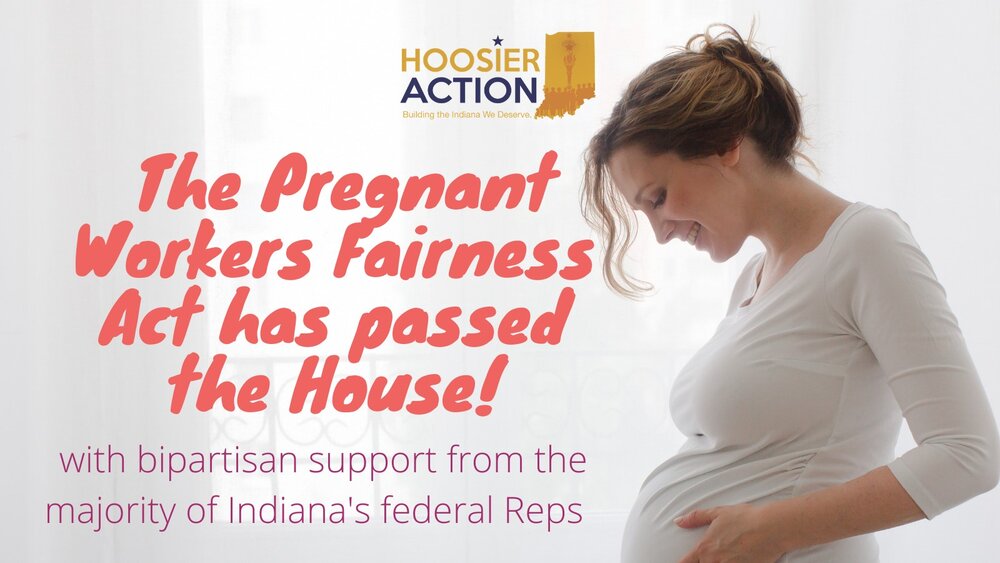 Great news: the Pregnant Workers Fairness Act (PWFA) has passed the House and will now move to the Senate! The Moms of Hoosier Action have fought for three years at the Statehouse to try to win protections for pregnant workers. Thank you to Representatives Buschon, Carson, Hollingsworth, Mrvan, Spartz, and Walorski who voted to pass the PWFA. We look forward to working with Senator Young and Senator Braun to pass this must-needed legislation into law this year! Email our Senators by going to hoosieraction.org/protect-pregnant-workers 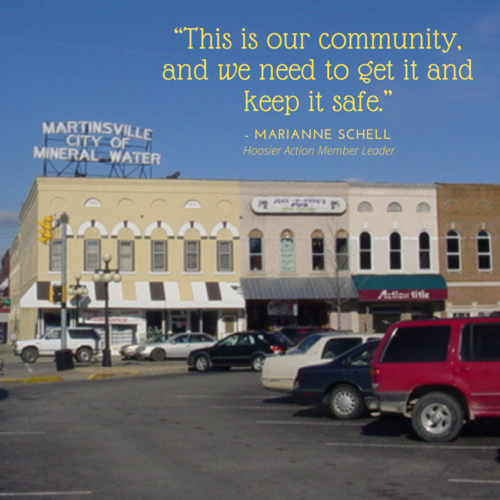 Our Morgan Co. chapter is continuing their hard work amplifying the voices of impacted families and encouraging community residents to get involved with the EPA’s testing and treatment efforts for the toxic water plumes in Martinsville, as recently reported in the Indiana Environmental Reporter. 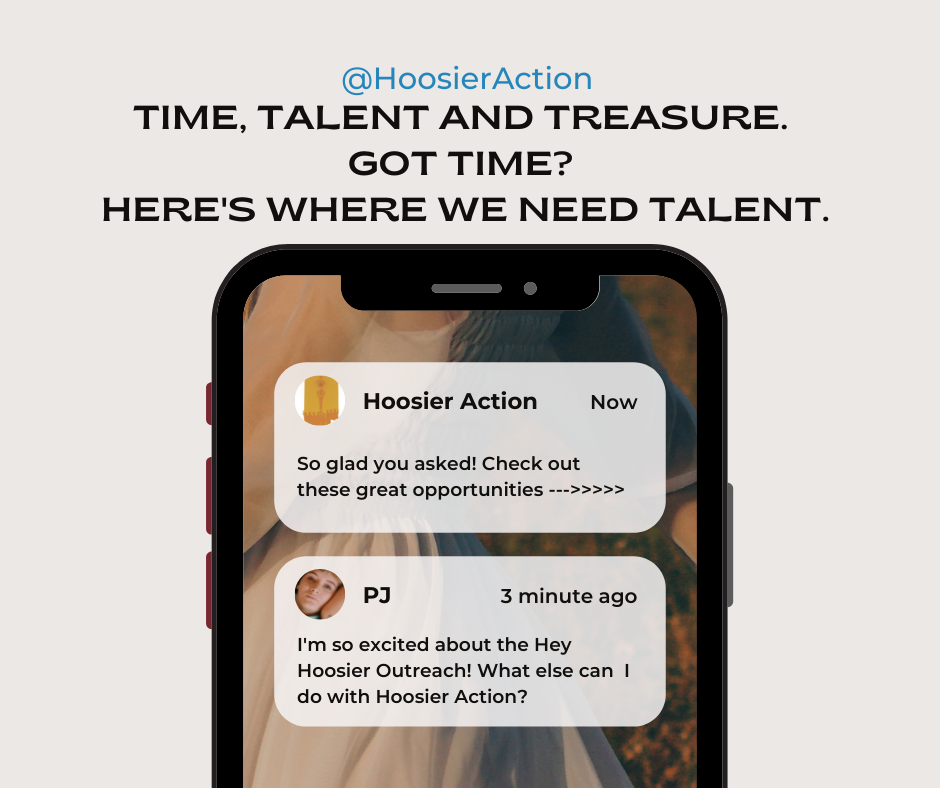 Do you have experience with app development, technical support, or databases and the desire to improve our state?  Join the Hoosier Action Tech Team today!  Reach out to Nate at tech@hoosieraction.org with any questions.

Hoosier Action Resource Center (HARC) is looking for people to join their Research Team. If you love research, writing, and data analysis, contact Tracey (tracey@hoosieraction.org) to learn more about the Research Team. 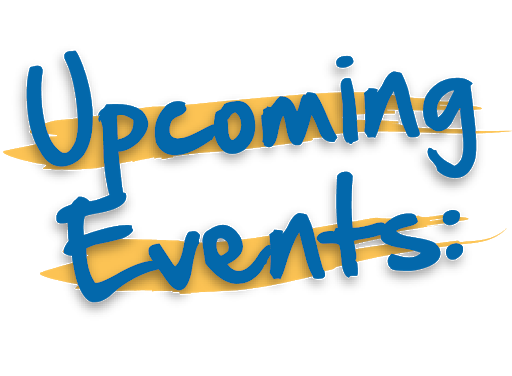 You can always find our upcoming events at hoosieraction.org/events!

Hoosier Action is holding a Deep Canvass training and phonebank on June 10 from 6:30pm-8:30 pm ET! Deep canvassing is one of the most powerful tools we have to build relationships, uncover what motivates our neighbors, and persuade. Deep canvasses are candid, two-way conversations where canvassers ask their fellow Hoosiers to share their relevant, emotionally significant experiences and reflect on them aloud. 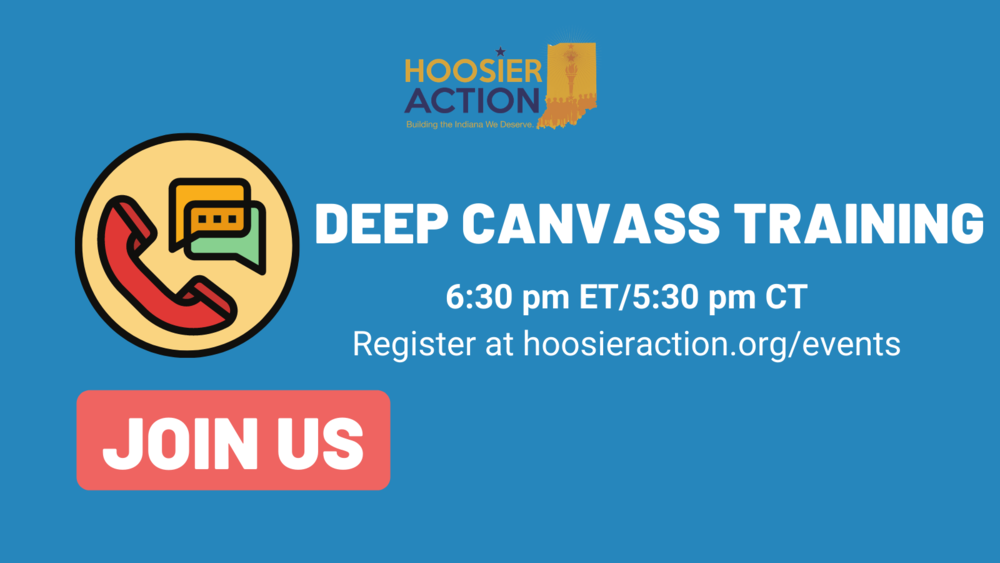 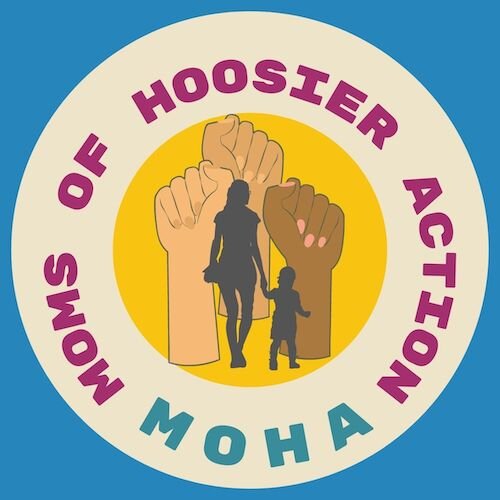 Join the Moms of Hoosier Action for a chapter meeting Sunday, June 13 from 3:00pm-5:00pm ET. We will recap and reflect on the legislative session and plan for the future. 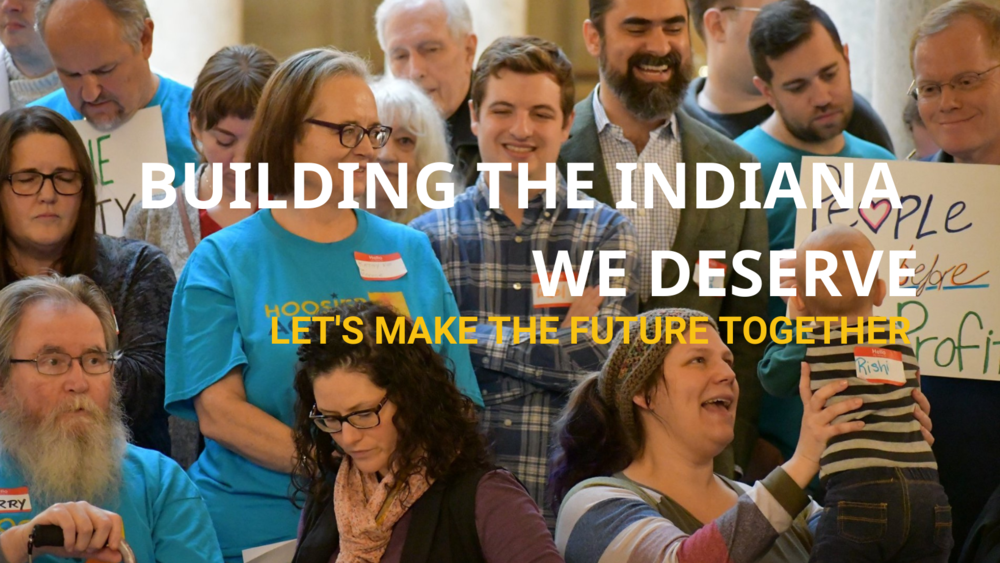 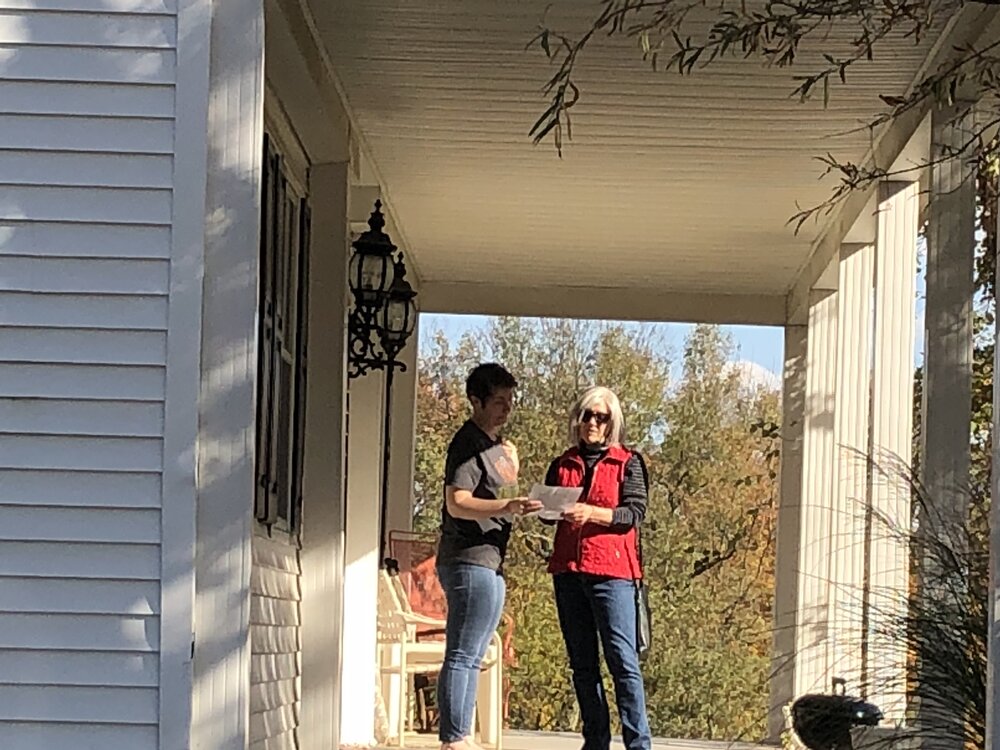 Our work would not be possible without contributions from Hoosiers like you. Dues-paying members fund and drive our work. Become a dues-paying member of Hoosier Action for just $5 a month to fund the future of Indiana!

Sign up today to become a monthly dues-paying member by going to hoosieraction.org/join-us. Together, we can make Indiana a place where all Hoosiers, no matter their zip code or the color of their skin, can thrive.

One time contributions can also be made at hoosieraction.org/donate